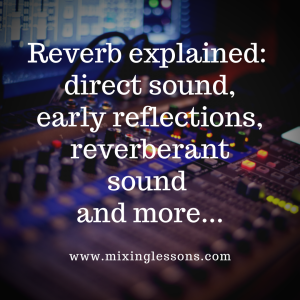 Something that can really enhance a mix is the addition of reverb. Understanding how reverb occurs naturally in spaces is essential to getting the best results when applying reverb in your mixes. In this article, we’ll examine exactly how reverb works.

Reverb explained: what is reverb?

When a sound is made, whether it be by a singer, snare drum, guitar etc. its sound propagates outwards sending sound waves in all directions. When this happens, the sound does not just travel directly to a listener’s ears. It also travels to the walls, ceiling and floor of the room that the sound occurs in. The sound then bounces off these surfaces creating reflections. The occurrence of a sound and its associated reflections can be broken into three parts:

Next to arrive to the listener is the sound that has reflected from the room’s surfaces. The sound we hear at this stage has generally only reflected from one or two surfaces. Walls, ceilings and floors are the main contributors and we refer to these reflected sounds as the ‘early reflections’ or ‘ER’.

Of course, this reverberant sound does not continue forever. As you will have experienced if you have ever clapped your hands in a large hall, reverb is temporary and it ceases after a certain amount of time depending on the nature of the room.

The time taken for reverb to decay varies depending on the nature of the room that the sound occurs in. Generally speaking, the larger the room, the longer the RT60. The decay time is also influenced by the materials that are present in the room. Highly reflective materials like plastered walls will yield a longer reverberation time as the sound will reflect from surface to surface with minimal absorption taking place. Conversely, a room with carpeted walls, floors and ceilings would have a much shorter reverberation time as much of the sound will be absorbed rather than reflected.

Reverb explained: using reverb in your recordings and mixes:

Reverb is a natural occurrence and is something that we experience regularly in every day life. As such, the addition of reverb in our songs is highly desirable. Without it, songs can lack depth and ambience and they can sound unnatural. That said, with the exception of some specifically designed high end studios and certain other kinds of recordings, like an orchestra performing in a concert hall for example, we don’t generally record natural reverb as it occurs in a room. Instead, we take steps to record the driest signal possible. We then add reverb afterwards. These days, this is most commonly done using a reverb plugin in a DAW.

Producers adopt this process because by adding reverb to a dry signal in a DAW, you gain complete control over the sound that is achieved. Whereas, if the reverb was captured as part of the recording, it is largely unchangeable and is difficult to alter if and when necessary. In addition, the kind of reverb that occurs naturally in a space that we have access to as home studio users is unlikely to be as desirable as the kind that we have access to via modern reverb plugins.

Are you interested in getting the best quality recordings and mixes that you can in your home studio? Be sure to download your free 4-guide home studio bundle here.