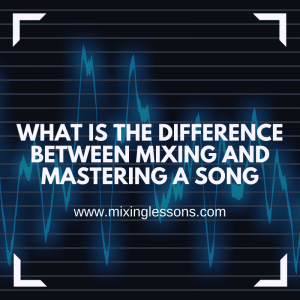 Understanding the difference between mixing and mastering.

The difference between mixing and mastering: what is mixing?

Mixing occurs BEFORE mastering. In mixing, an engineer will work with all of the individual tracks which make up the session. In a typical rock mix, the tracks would likely consist of multiple individual vocal tracks, guitar tracks, drum tracks (kick, snare, overheads) etc. The mixing engineer sets different tracks to different volume levels. They also place tracks at different pan positions so that they appear from different parts of the stereo field.

The mixing engineer will carry out equalization. This allows the engineer to control the frequency response of different tracks to achieve a desired characteristic. The mixing engineer will use compression to control the dynamic range of various tracks. The engineer is also likely to apply reverb(s) to the tracks to create depth within the mix. The mixing engineer may also apply creative touches to the mix such as the automation of changes to levels, panning, reverb, compressors, EQs throughout the song. The result of this mixing process is the creation of a final stereo audio file. This mixed audio file is then ready for mastering.

The difference between mixing and mastering: what is mastering?

Mastering occurs AFTER mixing. At this stage, the engineer will work with a mixed stereo audio file. The mastering engineer will apply compression to the track to reduce the whole songs dynamic range. It is common for a mastering engineer to use a multiband compressor. The engineer uses this to control the dynamic range of the track’s various frequency bands individually. This may be used alone or in conjunction with other compressors.

The engineer will apply each of these processes to all of the tracks which make up an album or any other kind of release. Mastering is carried out on each of the tracks on a release to ensure that they share a similar volume level, sound and feel. Mastering ensures that all of the tracks form a cohesive piece of work as well as ensuring that the tracks sound good across multiple platforms. The mastering engineer will also often be responsible for creating appropriate fades at the beginning and end of songs, applying ISRC codes, track names etc. If the tracks are to be replicated to CD, then the mastering engineer will also usually ensure compliance with the Redbook standard, which defines the technical specification for audio CD.

The difference between mixing and mastering.

So, does this breakdown help you to understand the difference between mixing and mastering? Leave your comments or questions in the section below.