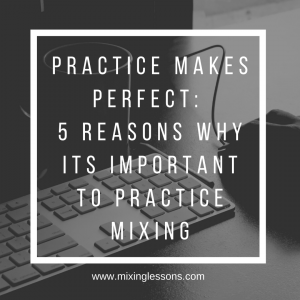 It stands to reason that the more times you do something, the better you get at doing it. But when it comes to music, in which areas will you see the biggest benefits, the more you practice mixing?

When you practice mixing, you’ll experience instruments being played in different ways:

Musicians can play instruments in so many different ways. Lets take for example a snare drum. Doing something like compressing a snare will require different settings depending on the way that the snare is being played. One song may feature a drummer playing consistent hits, whilst another may feature a combination of accents and ghost notes. As such, each would require different attack, release, threshold settings etc. on the compressor. It’s not just about experiencing mixing with lots of different instruments. It’s also about mixing lots of different examples of the same instruments.

The more you practice mixing, the more you’ll get to know your speakers:

If there’s one thing that really helps when you’re getting to grips with mixing, it’s getting to know your speakers. Each different brand and model of studio monitors will recreate sound differently. For that reason, it’s important to get to know the sound of your speakers. By doing lots of different mixes on your studio monitors, you may notice characteristics about them that it will help to be aware of. You may find that your studio monitors are slightly muddy in the low mids or that the high-end is a little exaggerated. You’ll become more and more accustomed to the sound that your speakers produce, the more you mix.

The more you practice mixing, the more accustomed you will become to your room:

As well as your speakers, you’ll also get used to the sound of the room that you’re mixing in. When it comes to home studios, many people’s rooms aren’t ideally set up for mixing. The good news is however, that the more you mix in your room, the more aware you’ll be of the effect that the room’s acoustics are having on the way you’re hearing your mix. The more you practice mixing in your room, the better you will be at identifying the problem areas and the issues that your room has. So you’ll be able to deal with them effectively.

The more you practice mixing, the better you’ll get at critical listening:

One thing you’ll notice the more you practice mixing, is that you’ll start to listen to things far more critically than you used to. You’ll start to notice things about songs that you never previously noticed. You will also find that you are suddenly able to notice things in your own mixes that you may have missed before. You’ll be able to revisit old mixes which at the time you thought sounded fine, and you’ll now be able to identify improvements that you could make.

When you practice mixing, you’ll learn from your mistakes:

For me, nothing helps to understand how to do something correctly quite as well as getting it wrong at first. Personally, I think that learning from your mistakes is one of the most effective ways to learn. In fact, the more comfortable you are with the idea that it’s OK to make mistakes, the better your mixes will be. Not being afraid to make mistakes gives you confidence to experiment with different aspects of mixing to see what kind of results you get.

It’s safe to say that if you practice mixing, you will get better and better at it. How has practicing mixing helped you with your own productions? What areas have you noticed the most improvements in? How have those improvements benefited your mixes?