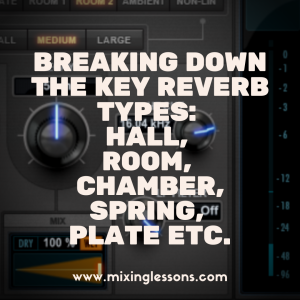 In modern day digital music production, we have the option to use many different reverb types. Most reverb plugins will come with options like ‘plate’, ‘hall’, ‘chamber’ etc. Each setting is designed to emulate the sound of a different kind of reverb. Some look to emulate real spaces like halls and rooms. Other settings are designed to emulate the mechanical reverb systems used in analogue recording studios, such as plate and spring reverbs. Then there are those which are used purely as effects, like gated and reversed reverbs.

It helps to know what you can expect from each of the different reverb types that your reverb plugin offers. In this article, we’ll examine the most common reverb types to see what kind of sound these settings produce. First, let’s look at the characteristics of reverb types which emulate real spaces:

Exhibiting a long decay, hall reverbs emulate the large, thick, smooth and luscious reverb characteristics of a concert hall. They work really well for strings and orchestras. They also work well for vocals, keys and drums when applied in controlled amounts. But be careful not to overdo it, as they have the potential to make your mix sound washed out or muddy if not used carefully.

Room reverbs emulate normal, natural sounding rooms, such as your home living room for example. Accordingly, they can provide a natural, neutral and tight reverberant sound, usually with a fairly short decay. Most reverb plugins will give you the option to select from different sized rooms. Room reverb works well for vocals, acoustic guitar, piano, drums and most other instruments as well.

Church reverbs emulate the sound of large highly reflective spaces with very long decay times. These can sound very immersive and impressive. They are well suited to organs, choirs and strings. But keep in mind that intelligibility can potentially suffer with such a big reverb sound.

Ambience reverbs do not attempt to recreate any particular environment. Instead, you can use them to provide a sense of space in a very transparent way.

In the early days of audio recording, ‘reverb chambers’ or ‘echo chambers’ were the first means of adding reverb to a dry recording. Producers achieved this by placing a speaker in a reverberant room along with a microphone. They would then play a recording through the speaker. The microphone would capture the sound of the audio being played through the speaker in the reverberant space. That signal would then be fed back to the mixing desk, complete with reverb. The producer could then blend this reverberant signal with the other tracks to add reverb to a song. Any space with a desirable reverb could be used. Large commercial studios would often build a large dedicated room to use as their reverb chamber.

Reverb plugins with a chamber setting allow you to emulate this kind of reverb in your mixes. Chamber reverb is a little less natural than a room or hall setting. Never the less, it adds a rich, clear reverb to vocals, drums, strings and acoustic guitars.

Now, let’s examine the settings on your reverb plugin which emulate mechanical reverb types. These reverb types emulate the sound of the analogue equipment which was designed to produce a reverberant sound mechanically in the days of analogue recording.

Spring reverbs were developed in the days of analogue recording as a mechanical means of emulating reverb. This was done by feeding a signal into coiled steel springs to simulate reflections. A lack of distinct early reflections contributes to a spring reverbs’ inability to translate spacial information well. In fact, in general, spring reverbs do not create a particularly natural sounding reverb. Never the less, the sound is pleasant and is still effective. What’s more, their continued usage to this day means that it is a sound to which we are accustomed and their unique character is one that is still utilized in modern day mixes. Spring reverbs are often used on vocals and guitars. They are less suited to things like drums or other sounds with sharp transients. That’s because they create a very boingy response.

In addition to spring reverb, another means of creating a reverberant sound mechanically is the use of plate reverb. With a plate reverb, a signal is fed to a pair of thin metal plates which vibrate in accordance with the signal. Much like spring reverb, the sound created is not one of a real space. Like spring reverb, distinct early reflections do not occur. Never the less the sound is bright and smooth. Producers often utilize it for vocals, drums and guitars, but it is suitable for most other instruments too. Plate reverb can be particularly useful when trying to create a 60’s/70’s vibe.

Non linear reverbs are used as an effect to create reverbs that do not usually occur naturally. Rather than decaying in the way that reverb naturally does, where by the level of the reverb decays over time, a non linear reverb can behave in different ways. The reverb could, for example, get louder over time or build from quiet to loud and then die out. Possibly the most common type of non linear reverb is gated reverb. Gated reverb creates a burst of reverb followed by a sudden fast decay, as though a gate is placed after the reverb.

Also used by producers as an effect, a reversed setting on your reverb plugin simulates a reverb which grows from quiet to loud and then stops abruptly. This is the opposite to how we are used to hearing natural reverbs.

You may be wondering at this point, how plugins are able to emulate these different types of reverb. Well, reverb plugins emulate the sound of different reverb types via two main methods:

The first method of creating reverb digitally is algorithmic reverb. Algorithmic reverb uses mathematical calculations i.e. an algorithm to emulate the sound of real spaces or of mechanical reverb equipment.

The second is convolution reverb, also known as sampling reverb. This method involves creating an ‘impulse response’ in a real space. This is achieved by recording the reverb that occurs in a space when it is triggered by a short impulse, such as the sound of a starter pistol for example. The impulse response can then be analyzed by a convolution reverb in order to create a very similar response for any signal that is processed through it. The result is a very realistic emulation of real spaces or mechanical reverb units.

As you can see, there are many different reverb options available to you in modern day digital music production. What kind of reverbs do you like to use for different instruments? Leave a comment below.