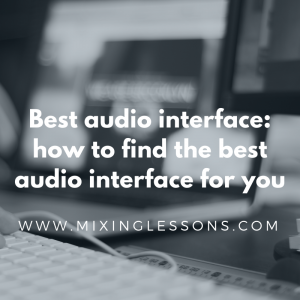 One piece of equipment which lives at the heart of most modern home studios is an audio interface. An audio interface allows you to route both analog and digital signals in and out of your computer. Common applications include the routing of instruments and microphones into your DAW. Common applications also include the routing of audio signals out of your DAW to monitor speakers or headphones.

Aside from connecting mics, speakers and other equipment to your computer, audio interfaces serve an additional purpose. An audio interface also ensures a much higher quality of sound reproduction than that which is possible from your computer’s built in sound card.

Because an audio interface is such an important part of computer based music production, it’s no surprise that there are many different interfaces on the market. In this article, I’ll break-down the things you need to consider when finding the best audio interface to meet your needs.

The next thing to decide on is the type of inputs that your audio interface needs to have. There are a number of different types of input. The inputs which are most commonly used are 3 pin XLR, midi, 1/4″ line-level jack and 1/4″ instrument-level jack.

If you are connecting a microphone to your interface then you’ll probably want a 3 pin XLR mic input. Maybe you want to record something like the line-level audio output of a keyboard. In that case you will probably want an interface with 1/4″ line-level jack inputs. Perhaps you want to send midi information into your computer from something like a digital piano. In that case you would benefit from the inclusion of a midi input. If you want to plug a guitar directly into your interface, then you will need a  1/4″ instrument-level jack input.

Once you have decided on the type of inputs that you require, the next thing to decide on is how many of them you will need. Perhaps you want to record both your voice, and the stereo output of a line-level electric piano simultaneously. In that case, an interface with a minimum of one mic input and two line-level inputs should be sufficient. If however you need to be able to close mic a full drum kit, then you will need substantially more mic inputs.

When it comes to comparing your requirements to different products on the market, it pays to really look into exactly how many inputs the interface has. For instance, if an interface has 8 inputs, what exactly does that mean? The interface might be made up of 8 x XLR inputs, or it could be made up of 8 x 1/4″ jack inputs. Perhaps it’s a combination of each. Or maybe it’s a combination of these plus another kind of input such as S/PDIF for example.

In some cases, an audio interface may use combo inputs. These are a type of socket which can accommodate both a 3 pin XLR and a 1/4″ jack. Although they can accommodate either type of connector, a single combo input cannot accommodate both at the same time. As such, an interface may be advertised as having the ability to record 2 x XLR inputs plus 2 x 1/4″ jack inputs. Be aware however, that if combo inputs are being used, then there may only actually be 2 inputs on the interface in total. So even though the interface does indeed have the ability to capture 2 x XLR inputs or 2 x 1/4″ jack inputs, that doesn’t mean that you can record 4 signals simultaneously, only 2. Be sure to do your research so that you’re absolutely certain about the inputs that each audio interface has.

Another important consideration is the kind of outputs that you’re going to need. One of the most common kinds of output is a 1/4″ line-level jack. This can be used to send signals to monitor speakers, outboard compressors, headphone amps etc. On some interfaces you may also find line-level XLR outputs. Modern audio interfaces often have a dedicated headphone output consisting of a 1/4″ jack output which is accompanied by its own volume control. Be aware that if an audio interface doesn’t have dedicated headphone outputs, then you will need to use some of the interface’s 1/4″ jack outputs to route signals to a headphone amp if you want to be able to listen on headphones. Depending on the type of music you produce, you may also need a midi output to send midi information to external devices.

At minimum, most audio interfaces have two 1/4″ jack outputs for your main monitor speakers and a headphone output which is usually located on the front of the interface. For many, this will be sufficient as it offers the ability to use headphones whilst you record your self and then listen back on monitor speakers when you mix. If however you are recording someone else, then you may benefit from an interface that has two built-in headphone outputs. That way, you are both able to wear headphones whilst you record.

If you are likely to record several musicians at one time, then it’s likely that each would require an individual headphone mix. In this instance, having just 1 or 2 headphone outputs on the interface would clearly not be sufficient. You would need to opt for an interface which had a sufficient number of outputs that could be routed to a headphone amp. This would enable you to provide multiple musicians with headphone mixes.

Will you be using any outboard effects, equalizers or compressors? If so, how many line-level outputs will you need to be able to accommodate this requirement? Be sure not to underestimate the number of outputs you may need.

By connecting an additional interface / preamp to your main interface, you’re able to utilize the inputs on both units. Some audio interfaces also include a second ADAT input. This allows a second interface / preamp to be connected to your main interface. This process also works if you want to expand your total number of outputs. Adding additional interfaces usually requires some syncing and general configuration to get things up and running properly. But it’s a great way to get the number of inputs or outputs that you need.

Best audio interface – finding the right one for you:

As you can see, there are a number of things that you’ll need to consider if you are on the hunt for the best audio interface to meet your needs. As you move along each of these steps, you begin to narrow down the number of interfaces that are suitable. Start by deciphering what kind of connection you need to make between your computer and an audio interface.

Next, work out the types of output you need and how many of them you will want. Finally, you need to decide whether or not you require ADAT connectivity to expand into multiple interfaces and / or preamps? Would it pay to plan ahead and opt for an interface which is capable of expansion just in case you need more inputs or outputs in the future? Finding the answer to all of these questions will determine exactly what the best audio interface for you is. Once you know, it’s simply a case of finding the one to suit your budget.

Best audio interface – what do you require from an interface?