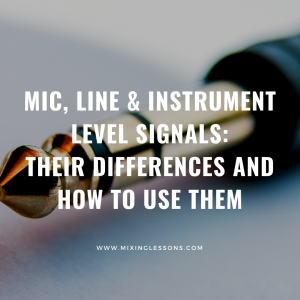 Three different signal levels which you will come across in audio recording are mic level, line level and instrument level. These terms refer to the voltage level of a signal. Instruments, microphones, outboard equipment etc. all put out different signal levels. When you connect such items to something like an audio interface, then it’s important to only connect items which produce a certain signal type to inputs which are designed to receive that signal type.

Mic Level: the lowest of the three signals is mic level. Mic level refers to the level of the signal which is produced by a microphone. Microphones produce a relatively weak signal. As such, they require a preamp to boost them to line level.

Line Level: when it comes to line level, there are two different kinds:

Some equipment has a switch which allows you to toggle between -10dBV and +4dBu. This allows you to take a signal from either consumer level or professional level items on a single piece of equipment.

How mic & instrument level are raised to line level:

It’s important to be aware that the type of connector you are using does not signify the signal level. On things like audio interfaces, mic level inputs are commonly female 3 pin XLR sockets. Line level inputs are commonly 1/4″ jacks. But these are not hard and fast rules. For example, you may also come across line level XLR inputs and outputs as well as line level RCA connectors. Whilst 1/4″ jacks are often line level, instrument level also operates on a 1/4″ jack. So you mustn’t assume what a signal level will be based on a connector type. It’s important to make sure you know what kind of signal level an input or output has. Luckily, input and output types on things like audio interfaces are usually labeled.

2 thoughts on “Mic, line & instrument level signals: their differences and how to use them”