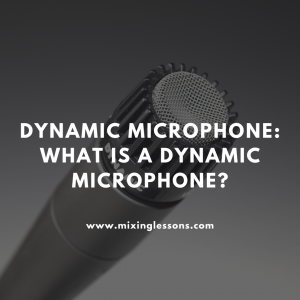 In this article, we’ll break down the characteristics of a dynamic microphone.

Whilst dynamic microphones are the go-to option in live sound, they also play an important role in the recording studio.

The sound characteristics of dynamic microphones:

In addition to having a roll off in the high-end, many dynamic microphones have a roll off in the low-end as well. However, there are dynamic mics which are specifically manufactured to be used on bassy sounds (such as the AKG D112). These mics are designed for recording things like kick drums and bass amps. As such, these mics have less or no low-end roll off. In fact, many examples of this type of mic actually have a boost in the low-end alongside other boosts and dips in their frequency response which are complementary when capturing sound sources which produce a lot of low-end frequency content.

Where a dynamic microphone really excels, is in its ability to cope with very high sound pressure levels. This makes them perfect when recording very loud instruments such as guitar amps, kick drums, snare drums and even some very loud singers. The output level of a dynamic microphone is typically lower than that of a condenser mic.

Dynamic microphones are tough and durable:

Do you use a dynamic microphone in your home studio? If so, what do you use it for? Leave your feedback in the comment section below.