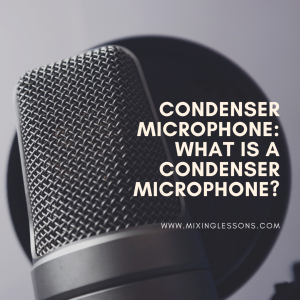 In this article, you’ll learn all that you need to know about the condenser microphone.

In audio recording, there are two main types of microphone. They are: ‘condenser’ microphones and ‘dynamic‘ microphones. Whilst other microphone types exist, such as ribbon mics for example, condensers and dynamics are by far the most commonly used.

Condenser microphones are not capable of handling very loud signals in the way that dynamic microphones can. So although they excel when capturing lower volume signals such as vocals or acoustic guitar, they are often not well suited to things like close-miking drums or recording loud guitar amps. Condenser mics typically have a much higher output level than dynamic mics. Some condenser mics have a built in pad switch to allow you to attenuate the output level of the mic.

Do you use a condenser microphone in your home studio? If so, what do you use it for? Leave your feedback in the comment section below.