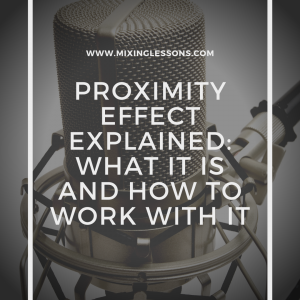 What is the proximity effect?

Proximity effect, also referred to as ‘bass tip up’, refers to the audible increase in the low end that occurs as certain types of microphone are moved closer to a sound source. The closer a singer gets to a microphone, or the closer a mic is moved towards a guitar, the more the low end is emphasized. You’ll notice proximity effect most when recording sounds which have a lot of low end to begin with. It’s something which can be used to really fatten up a sound. But it can also result in muddy, boomy recordings. In this lesson, we’ll break down which mics exhibit the proximity effect and how to best use it and control it.

The ability to exaggerate the low frequencies in a recording by moving the mic closer to the sound source can be very useful. It’s a process which can be used to fatten up vocals and instruments alike. For this reason, it is often utilized by voice over artists and radio presenters to make their voices sound deep and full.

Of course, the result of boosting the low end response of voices and instruments is not always positive. Too much low end can make things sound muddy and boomy. It can also reduce vocal intelligibility. As such, it must be approached with care. If you’re not paying attention to how close you’re placing your mics, then a microphone’s bass tip-up could mean that you capture a very woolly version of what would have otherwise been a nice clear recording.

Do you find the proximity effect to be an advantage or more of a disadvantage when you record? Leave a comment below.