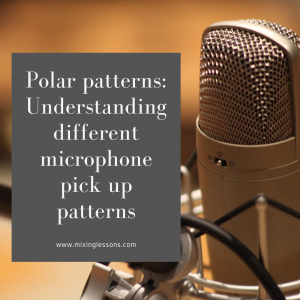 A microphone’s ‘polar pattern’ or ‘pick up pattern’ defines how sensitive the mic is to sounds coming from different directions. No matter what type of mic you’re using, whether it be condenser, dynamic or ribbon, your mic has a polar pattern.

Some mics have just one set polar pattern. With others, you are able to select from a choice of polar patterns. Which polar pattern to use and when depends on a number of different factors.

In this lesson, we’ll look at the most commonly used pick up patterns in audio recording. Let’s start with the three main patterns, ‘cardioid’, ‘omnidirectional’ and ‘figure of 8’:

A cardioid pick up pattern, also referred to as a unidirectional pattern, is most sensitive to sounds in front of the mic. It is less sensitive to sounds at the sides of the mic and it rejects sounds from the rear. As such, this pick up pattern is one of the most commonly used in audio recording. A cardioid pattern allows you to focus in on the sound source without capturing too much of the room sound. This makes cardioid mics a great option for home studio users. They are also ideal for live sound applications too.

With an omnidirectional pattern, the mic picks up sound from all around it. Ideal if you want to capture the sound of both an instrument and the sound of the room that it is being played in.

A figure of 8 polar pattern, also known as a bidirectional polar pattern, picks up sound from both the front and rear of the mic equally. It rejects sounds from the sides of the mic. Such mics are often used in mid/side and blumlein mic techniques to create interesting multi-mic recordings.

In addition to these three main microphone polar patterns, there are a few other polar patterns which can prove very useful in audio recording. They’re all variations of the cardioid pick up pattern and they are as follows:

A supercardioid polar pattern is even more directional than cardioid. It offers an even narrower pick up pattern with even less sensitivity at the sides. Supercardioid does however have a small rear lobe which picks up sound from the rear of the mic.

Even narrower still, and with a larger rear lobe, is hypercardioid.

Subcardioid, also known as widecardioid, is a wider version of the cardioid polar pattern. It’s a great option when you want to capture a broader image of the sound source that the mic is facing.

Which polar patterns do your mics have? What do you find to be the pick up pattern that you use most often when you record music? Leave a comment below.