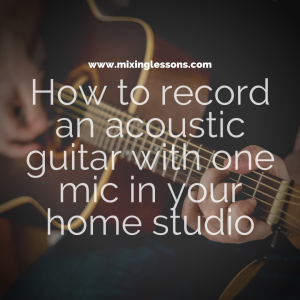 When it comes to recording acoustic guitar, there are many different options. If you have access to a collection of different mics, then there are many possibilities. But what if, like many home studio users, you record acoustic guitar with one mic. For the majority of people recording music in home studios, that mic will be a large diaphragm cardioid condenser. Well, the good news is that you can get excellent guitar recordings using just one large diaphragm cardioid condenser mic. Let’s discover how…

When it comes to recording guitar, there are a couple of steps to take which will dramatically improve the sound of your recording before you have even plugged in your microphone. The first step is to put new strings on your guitar. With old, dead strings, you’re likely to get a dull and lifeless recording. So a new set of strings will give you a rich and vibrant sound. Next, it’s imperative to make sure that your guitar is perfectly in tune. It sounds obvious, but it’s amazing how often slight tuning issues are overlooked. This causes problems later down the line when other instruments or vocals are added to the track. So be sure to check your tuning before you start and regularly between takes.

So with your instrument prepped and ready, let’s turn to the recording of the guitar. It is perhaps beneficial to first establish how not to record your acoustic guitar.

How NOT to record acoustic guitar with one mic

Many people are tempted to take their mic and place it directly in front of the sound hole at just a few inches away. This is actually one of the worst places you can place the mic. The sound that comes from the sound hole is usually pretty boomy. What’s more, with a cardioid mic, you have to consider something called the proximity effect. The proximity effect refers to the way in which any mic with a directional polar pattern captures an exaggerated low end response the closer the mic is placed to the sound source. Cardioid mics fall in to this category, so placing the mic this close and in this position is going to result in a boomy, bass heavy sound.

Instead, you should aim for an area of the guitar where you will capture a more balanced sound. By placing your mic at around the 12th fret of your acoustic guitar, you will capture a much more balanced tone. The mic should be placed around 12″ from the guitar. The mic should then be angled towards the sound hole. This position will help to minimize the proximity effect and will help you to capture the instrument as a whole. The result should be a nice, well rounded, tonally balanced sound. For that reason, this mic placement is one of the most commonly used to record acoustic guitar with one mic.

Of course, different acoustic guitars produce vastly different types of sounds. What’s more, the sound will also vary depending on the way that the guitar is being played. So don’t be afraid to tweak the placement and move the mic around a bit if you feel the need to in order to find the sound that you’re looking for.

What placement do you like to use when recording acoustic guitar with one mic in your home studio? Leave a comment below.