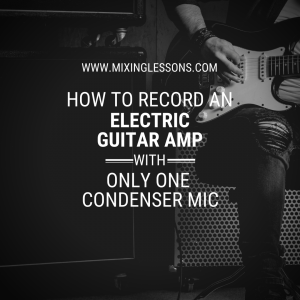 As with all recordings, it’s important to get the instrument sounding good before you record it. Start by putting a new set of strings on your guitar. Then make sure those strings are in tune when you record. Be sure to check the tuning regularly in between takes. The importance of perfect tuning cannot be overestimated.

Next, dial in the sound that you’re looking for with your amp. Use the tone controls on your amp and use your effects pedals to make things sound exactly the way you want. When it comes to the use of reverb, a little is usually fine, but don’t over do it. Remember that you can always add reverb in your DAW at the mixing stage. It’s no problem to add more reverb this way if you find that the guitar sounds too dry in the context of the mix. It is not so easy however, to try and make your guitar fit in the mix if you realize that you tracked with too much reverb whilst recording. So play it safe.

So, onto the recording… As previously stated, for the average home studio user, you’ll be recording with one large diaphragm cardioid condenser mic. If you only invest in one microphone for your home studio, then this is the one to go for. That’s because it can be used for vocals, guitar amps, acoustic guitars and hundreds of other instruments as well. For that reason, it’s one of the most commonly used mics not just in home studios, but in large commercial studios as well.

Begin by placing the mic about 6 inches from the amp. Place it so that the mic is pointing at the speaker at about half way between its center and its outer edge. You may have to shine a torch through the grill cloth to see where the speaker is. This placement will capture a rounded and well balanced representation of your guitar amp. This placement will also capture mainly the direct sound from the amp and very little of the room sound. This is ideal for home studio users who are not usually recording in specially designed acoustic spaces.

When recording your electric guitar amp in your home studio, there will be times when you want to vary the sound that you capture. Because you don’t have a collection of different mic types to use to vary the sound, you will have to achieve different sounds all with one mic. But that’s OK, the great thing about this technique is that with a few minor adjustments, you can capture very different characteristics.