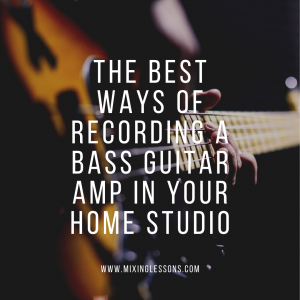 Recording bass guitar is usually approached in one of three ways:

1. Recording bass with a mic:

One method is to record your bass amp with one or more microphones. Condenser mics, ribbon mics and dynamic mics are all employed by producers to record bass amps. Cardioid, figure of 8 and omnidirectional polar patterns can all be used depending on the sound that the producer is looking for.

2. Recording bass with a DI:

Another method is to record directly from your bass guitar to your interface using a DI box. Alternatively, you can connect directly to your interface without a DI box via your interface’s instrument input if it has one. From here, the signal can either be used as it is or it can be processed through an amp simulator plugin to simulate the sound of a bass amp.

The third method to recording bass is to use a combination of one or more mics plus a DI. The mics and DI are then blended together in the DAW to create the sound that the producer is looking for.

In this lesson, we’ll look at the best ways to carry out these methods of recording in a home studio setting.

Before you begin the process of recording your bass guitar, it’s important to do a little prep. Put some new strings on your bass a day or two in advance. It’s also good practice to have your bass set up periodically to keep it sounding its best. Make sure your bass is in tune before you record and check again regularly in between takes. Checking your tuning regularly is the only way to ensure that you don’t end up with takes that are unusable later down the line. If you’re using an amp, then dial in the exact tone that you’re looking for and get everything sounding as good as it can in advance of the recording.

As we’ve already established, bass amps can be miked using any of the three main mic types and utilizing any of the different polar patterns. In this lesson however, we’ll concentrate on two mic types in particular. They are large diaphragm cardioid condensers and dynamic cardioid mics made specifically for low-end instruments like bass amps and kick drums. Why these two mic types? Firstly, they are the mics which you are most likely to have in your home studio. Secondly, they are arguably the most commonly used mics for recording bass in commercial studios. As such, they are two ideal mics to get to grips with for bass guitar recordings.

The mic which you’re most likely to have access to in your home studio is a large diaphragm cardioid condenser. You can use this mic type to record vocals, acoustic guitar, electric guitar amps and countless other instruments. Using this kind of mic on a bass amp will give you a natural sounding recording.

As well as altering the sound by moving the mic left to right, the sound can also be changed by moving the mic towards or further from the amp. Because the mic has a cardioid polar pattern, the proximity effect is a factor to consider. The proximity effect dictates that a signal’s low-end response will be exaggerated as the mic is moved closer to the sound source. The distance between the mic and the bass amp will also alter the ratio of direct sound to room sound. By placing the mic closer to the amp, you will capture more of the direct sound from the amp. By moving the mic away from the amp, you will introduce more room sound into the signal.

Generally speaking, placing the mic 2 – 4” from the speaker is a good starting point. From there, you can move the mic as far back as you need to in order to capture the sound that you feel is appropriate for your track.

The other type of mic which is commonly used to record bass is a dynamic mic with a cardioid polar pattern, specifically a version which is designed for recording low-end instruments. Mics like the AKG D112 and the Audix D6 are both examples of this kind of mic. The frequency response of these mic types are specifically tailored for low-end instruments. Accordingly, they usually exhibit a strong low-end response and a peak around 3-5k. They also often have an attenuation in the mids. As you can imagine, this provides a very complementary frequency response when recording a bass amp.

As for mic placement, your options are very similar to those provided by a condenser mic. Placing the mic to point between the middle and outer edge of the speaker is a great start. Again, you can move the mic towards the centre of the speaker for more bite. Or you can move the mic towards the outer edge for a smoother tone. Once again, the proximity effect is a factor, so the distance between the mic and the amp will affect the low-end response in the recording. It will also alter the ratio of direct sound to room sound. With a dynamic mic, start around 2” from the speaker and keep moving back until you find a sound that you like.

Combining mics and a bass DI

On its own, a bass DI track can sound clean and dry. But at the same time, it can sound a little lacking in body and character. These are qualities which can be hard to achieve without recording a bass amp. As such, the combination of both a bass DI and a recording of an amp made with one or more mics can give you the perfect combination to achieve a great bass guitar track.

When you combine both a mic and a DI, then there will  be a slight time difference between the two signals. The signal recorded with a mic will be delayed due to the time taken for the sound to travel from the amp to the mic. This time difference is not long enough for you to hear a delay. But it is enough to cause the two signals to be out of phase with each other. This can cause phase cancellation which can make the combined tracks sound thin and weak.

The good news is that resolving this is actually very straight forward in a DAW. Zoom into the mic and DI waveforms until you can clearly see the first peak in each waveform and move the mic track back so that its first peak aligns with the DI track’s first peak. Both peaks could be positive, or both could be negative, it doesn’t matter, as long as they are both the same. This will help to ensure that your combined mic tracks and DI tracks sound as good as they can.